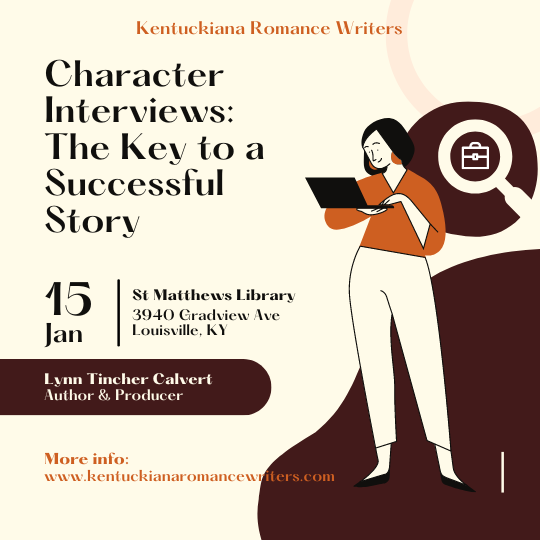 KRW welcomes Lynn Tincher Calvert who will be presenting “Character Interviews:The Key to a Successful Story” at our January meeting. (Please note that the meeting is a week later than our normal Sunday of the month)

Lynn studied Theater Arts at Eastern Kentucky University hoping to become a Drama/English teacher. Lynn had several articles published in local magazines and online, but the thought of writing a novel always stuck with her.

Inspired by Nora Roberts, JK Rowling, and Greg Isles, Lynn wrote Afterthoughts, the first book in the Mind Bending Series, a fictional psychological crime series that follows the life of a young Louisville Police detective named Paige Aldridge. Blackwyrm Fiction picked up Afterthoughts for publication in 2008. When she signed the contract, it landed Lynn on the center page for a story in Leo Weekly. Since then, Lynn released Left in the Dark, Buried Deep, Where There is Light, and the fifth book, Junna will release soon.

In 2013, the unbelievable happened. Kilted Pictures and Dancing Forward Productions in Los Angeles optioned Afterthoughts for movie production. It is currently in pre-production with plans to shoot in Louisville, Kentucky soon. With Executive Producer credits, Lynn is working hard to draw on local talent and bring the movie’s production to her much-loved city of Louisville.

Between writing Afterthoughts and Left in the Dark, doctors diagnosed Lynn with Brugada Syndrome, a rare and fatal genetic heart disease. She is determined to help spread the word about Brugada Syndrome and hopes to help others who are dealing with it or other heart diseases. Lynn was the 2014 Red Cap Ambassador for the American Heart Association Heart Walk where she was the guest speaker at several events and a runway model for the Go Red for Women luncheon.

In 2022, Lynn took over the helm of Stardust Romance as Associate Publisher. Stardust Romance is an imprint of Hydra Publications. She looks forward to helping grow this line of books for Hydra.